Alexander N. Dossett was a 26-year-old seaman in the United States Navy when he sustained fatal burns from a powder explosion during target practice aboard the U.S.S. Massachusetts. He was buried in Durham, North Carolina’s Old Maplewood Cemetery.

Below the photos is a newspaper article from 1903 describing the accident and listing  other casualties. The explosion occurred on January 16 and Alexander died January 22, so when the article was published he was still alive. 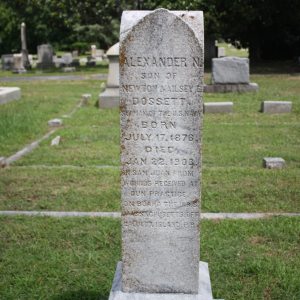