Raleigh’s City Cemetery database has once again proven that the graveyard is full of interesting stories surrounding the lives of the people buried there. In the notes section for Patrick Conway, it reads, “Native of Ireland; cooly, deliberately,& cruely murdered.” There is no information about the location of his grave or a birth date, but he died on April 21, 1809. He had only been in Raleigh for two years. Prior to moving to North Carolina he was a merchant in Richmond, Virginia. The rest of his life story is a mystery.

The details of Patrick’s gruesome murder are outlined in the local newspaper.

Raleigh Minerva, Thurs., April 27, 1809
MURDER OF PATRICK CONWAY
We have to record the most daring and outrageous murder, ever committed in
this or any other county. On Friday night, a little before 11 o’clock, MR.
PATRICK CONWAY of Raleigh, merchant, was found lying behind his counter, in
the most shocking condition.-He was first discovered from his groans, by two
young men, JOHN OWEN and TURNER DAUTRY, who alarmed some neighboring
gentlemen. Medical aid was procured, but to no effect – the deceased had as
many as eight wounds about his head and face; his skull was fractured in some
place, in others mashed, and his jaw and cheek bones broken; he spoke but
twice and then only one or two words, and died in about an hour. The floor,
where he lay, was covered with blood, and from the violence of the blows had
gushed up on the shelves. He was too far exhausted to give any information of
the murderer. Among the blood, and about the body, were several fractured
pieces of green pine stick and bark, which had apparently been knocked off the
stick by the violence of the blows.
It appears the murder was committed in order to rob the store of the
deceased, as  the money drawer was found open, the money taken out and some
dropped on the floor. Though it is believed that the perpetrator did not get
much, as the bulk of the cash was kept in another place.

JOHN OWEN, a cabinet maker, one of the young men who first gave information
of the situation and the deceased, has been suspected. He was taken up next
day, and after a lengthy examination by the magistracy, and after hearing
testimony, was committed to jail of this city, to wait his trial the first
Monday in October next. The circumstances are strong against him.

The butt end of a pine stick has been found in the store of the deceased,
not far from where it lay; it is bloody. A witness has proven that OWEN cut a
pine stick in his presence, the afternoon before the murder, and on comparing
the stick with the stump, they very exactly fit.

MR. CONWAY was an Irishman by birth, and had resided among us nearly two
years, during which time he has sustained a worthy reputation. He was
remarkable for a lively disposition, and desire to please. His death is
therefore a considerable loss to our society.
John Owen was found guilty of Patrick’s murder, but the indictment was appealed in 1810 due to a discrepancy with said indictment. ﻿The court ruled in favor of John and his attorney, but he wasn’t freed. He was sent back to prison to await a new indictment.
The August 28, 1811 issue of The Centinel out of Gettysburg, Pennsylvania reported that John clearly had no intention of paying for his crimes.
Prison EscapeOn the 9th inst., three desperate villains made their escape out of the jail of Raleigh, (N.C.) – John Owen, confined for the murder of Patrick Conway, is about 6 feet high, 22 years of age, very slender, pale complexion, brown hair, swelled ankles and is much emaciated by sickness.  Richard Kennam, imprisoned for counterfeiting is a stout man about 6 feet high, about 27 years of age and has scars on his cheek bone.  Britain Lassiter is about 22 years of age, thick lips and grey eyes. These fellows are advertized in the Raleigh papers and large rewards offered for their apprehension.  For Owen, 200 dollars will be given.
I couldn’t find out if John was ever caught after some time searching.
(None of the people mentioned in this post are related to me.) 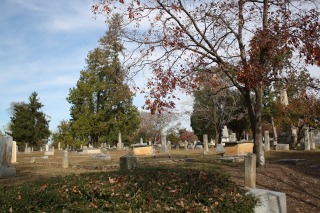