Skip to content
J.T. Rudd’s entry has been sitting in my queue for close to two years now because I hoped that somewhere I’d find out more about his life than his tragic death at his own hands. I’ve researched his name intermittently during that time and unfortunately came up with little more than his obituary, which you can read below the photo of his grave marker in Danville’s Green Hill Cemetery. His death notice only gives us a glimpse of how his final days (or weeks or months) played out, although I’m sure that there were many happier memories that were never made public.
At least I hope that’s the case. 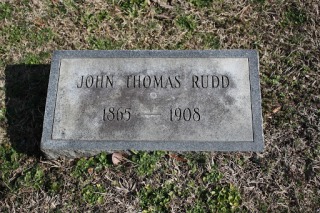 “DANVILLE REGISTER, Danville, Va., Fri., Jan. 3, 1908, p. 2, col. 3 [edited]. J. T. Rudd, a former merchant and well known business man of the Northside, committed suicide by shooting himself through the head yesterday at his home on North Main street, near the end of the street car line. Despondency, due to ill health, drinking and business troubles is supposed to be the reason actuating the terrible deed. Mr. Rudd was a native of Lunenburg County, Va., where he was born about 43 years ago. He moved to Pittsylvania early in life and about 15 or 16 years ago came to Danville. He was married twice. His last wife, Mrs. Berta Slaughter Rudd, two daughters, Evelyn, aged 6, and Garnett, aged 3, survive him, together with a father, several brothers and a sister, all of whom live in Lunenburg. Mr. Rudd was engaged in the mercantile business here up to about a year ago, when he sold out. He was a Mason. Funeral services will be held this afternoon from the residence of Mr. C. D. Daughter (sic) followed by burial at Green Hill Cemetery.”

One thought on “John Thomas Rudd”