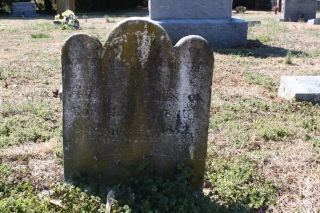 Nathaniel Johnston’s weathered marker in the Yanceyville Presbyterian Church graveyard doesn’t particularly stand out amongst the others. You can surmise based on the style that’s he’s been in the ground for awhile but there’s no indication to the casual observer that Johnston died in a particularly cold-blooded fashion. What’s even more interesting is that the man responsible for his death is buried not far away in the same graveyard.

But before we get to the April 1882 afternoon when Johnston was shot in the middle of a busy Yanceyville street, let’s look at some of the particulars of his life.

Nat was born on January 20, 1840 to Thomas Donoho Johnston and Adaline Williamson Johnston. His father was the President of the Bank of Yanceyville, once considered Yanceyville’s wealthiest resident. Nat most likely grew up in Clarendon Hall, the elaborate home his father built in 1842. He had a number of siblings, one whose name appeared here in an earlier post. His sister Rebecca’s son died from laudanum poisoning in 1895, but that was years after Nat’s death.

Nat’s family was well-connected in the Yanceyville and Danville areas. His uncle was Col. George Williamson and his brother-in-law was W.N.Shelton, a man whom I’ve also researched. Despite his family’s standing in the community there is little information specifically about Nat’s childhood, schooling, or adult life. Often I stumble upon something in the society pages of old newspapers, details which at the time might seem trivial, but those little tidbits often give us an idea of how the person lived day-to-day.

Someone named Nat L. Johnston enlisted in North Carolina’s Company C 3rd Calvary Regiment in 1864. It’s highly likely that this is the same Nat Johnston, but without anything but a name to go on I’m hesitant to say with 100% certainty that our Nat served in the Civil War.

The majority of information about our subject came from newspaper accounts printed after his death. One paper referred to him as “generous-hearted but hot-headed” and reported that he usually carried a firearm.

This takes us to the fatal affray in April 1882. Based on what I’ve read, Nat wasn’t really involved in the original quarrel between Felix Roan, whose father had been a prominent doctor, and George Williamson, Jr. (likely his cousin).

On the Saturday before the shooting George Jr.’s father Col. George Williamson (formerly a NC State Senator) accused Felix of being a spy for the IRS and teased him about his appointment as Postmaster. Allegedly Williamson had been spreading rumors about illicit dealings in Roan’s professional capacity and the events that followed were the result of Williamson’s ribbing and gossip. An argument broke out between the two men the elder Williamson was beaten. (Accounts vary as to whether or not blows were actually exchanged.)

One paper reported that on Wednesday morning, April 26, Col. Williamson and Felix Roan were involved in another argument. Just before noon someone sent word for Nat to come to Yanceyville, where he and George Jr. ate and then started out into the street. At the same time Roan was also in the square carrying a double-barreled shotgun.

The three men faced each other in front of Henderson’s store, which was beside the post office. Roan warned Johnston and Williamson to stop advancing toward him, but when they didn’t he raised his weapon. Johnston, also armed, “made at Roan(e)” which suggests that he pointed his weapon at his longtime friend. Roan fired, fatally wounding Johnston. Felix and George fired at each other until they ran out of ammunition. Some reports claim Felix was wounded in the leg, others claim he left the duel unscathed. Williamson sustained a shot to the head. (Williamson survived his injuries, living until 1923. He is buried in the same churchyard with Nat and Felix.)

I was unable to find evidence that Roan served time for Johnston’s killing but I ran across some information claiming that a grand jury considered his actions self-defense.

These were days when blood was considered thicker than water and people took words very seriously. Nat Johnston came to settle a score for a distant relative and in the end he lost his life.

We published a dispatch yesterday announcing the killing of Mr. Nat Johnston and the dangerous if not fatal wounding of George Williamson, Jr. by Felix Roan, at Yanceyville, Caswell county. The following particulars we gather from a dispatch to the Lynchburg News, which will be read with interest as the families of the young men are very prominent in this State.

Danville, Va., April 26 [1882]. — A shocking homicide at Yanceyville, N.C., sixteen miles south of Danville, today, resulted in the instant killing of Nat Johnston and probably fatal wounding of George Williamson, Jr., besides the wounding of Felix Roan, postmaster at Yanceyville.

Ex-Senator Williamson playfully twitted Postmaster Roan about receiving his appointment as postmaster from the Republican administration, which gave umbrage to the postmaster; but no collision occurred then between the parties.

This morning a difficulty occurred between the same gentlemen, the particulars are not reliably ascertained here.

A little before noon to-day Nat Johnston, a nephew of Col. George Williamson, was sent for while at work on his farm, near Yanceyville, to go to the village at once. He did so, and soon after getting there and dining, he and George Williamson, Jr., walked out upon the street together towards the post office.

At the same time Postmaster Roan, coming from dinner, was walking along the street from the opposite direction, with a double-barrel shot gun. The parties approached each other in front of Henderson’s store, next door to the post office. Roan warned Johnston and Williamson not to come near.

They continued approaching and Roan fired two shots from his gun, each shot hitting Johnston and producing instant death. Mr. Roan and young Williamson fired at each other with pistols, which firing first not positively being known.

The dead body of Johnston was laid out in Henderson’s store.

Young Williamson was taken care of by friends, and Roan gave himself up to arrest.

All the parties are highly connected by birth and marriage. Johnston, as stated, was a nephew of Col. George Williamson, a prominent and influential North Carolina State Senator for several years.

Johnston was also a brother-in-law of W. N. Shelton, of Danville, was a generous-hearted but hot-headed young man, and generally went armed.

Young Williamson, son of Col. Geo. Williamson, was a young man of fine promise and prospects in life, and belonged to one of the highest and most influential families in North Carolina. Postmaster Roan is a son of the late Dr. N. M. Roan, who in lifetime was one of the most eminent physicians in the Southern States, and very influential.

The affair has cast a deep gloom over the community. Mr. Shelton, brother-in-law of Johnston, James A. Henderson, also his brother-in-law, and Col W. E. Williamson, brother of Col George Williamson, all citizens of Danville, went to the scene of the sad affair this evening, being sent for to do so.”