Daisy “Evelyn” Marrion is buried in “Showmen’s Rest,” an area of Los Angeles’ Evergreen Memorial Park and Crematory, among the graves of over 400 former carnival and circus workers. Until I heard about this plot, I never really thought about where circus performers were buried which is alarming since I’m so fascinated by circus and carnival culture. It makes sense that graveyards around the world have special plots for “carnies;” most people are buried with their families and for this particular nomadic population, their fellow circus folk are family. 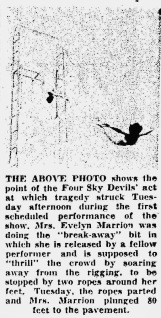 Evelyn was 38 when she passed away after an accident during a performance with “The Four Sky Devils” at Dixon’s Summer Days festival on August 23, 1955. Evelyn had years of experience in the circus business as an aerialist according to the Dixon Telegraph (24 Aug. 1955). I tried to find information about Evelyn’s early circus career, but came up mostly empty-handed. (One source indicated that before her marriage to Ray she’d ran a concession stand and that she was the only member of her birth family in the carnival business.)

Hundreds of onlookers had gathered at around 4:45 that evening to watch The Four Sky Devils, which at that time included Evelyn, Joe  and Shirley Carpini and Jimmy Lloyd. During the breakaway part of the routine, Evelyn was supposed to “fly” away from her partner and out over the crowd, secured by ropes tied at her ankles. The ropes, which had only been used since the end of the previous season and designed to hold 900 pounds, parted and Evelyn plunged 80 feet to the pavement below after first hitting a tree, a trailer, and a wire fence. Mrs. Joe Carpini told a reporter that after the accident, Evelyn’s shoe was torn and her “toenails torn away,” but that she didn’t lose consciousness. The newspaper described the crowd as “horror stricken” and “too stunned to utter a sound” after the accident, which resulted in a number of serious injuries.

Evelyn’s husband Ray (also an aerialist who’d recently taken a job at Douglas Aircraft Plant) was in Los Angeles at the time of the accident. Upon notification he had to be hospitalized briefly for shock, but then caught a flight to Illinois and was at his wife’s side by the next evening. Ray’s first wife died in a similar accident, which I suppose is the risk one takes when going down such a dangerous career path or marrying those who do. In the true spirit of “the show must go on,” Ray took Evelyn’s place in the next afternoon’s act, only in the absence of the breakaway ropes Ray performed a swing act that relied on his neck for support.

The newspaper printed an image of Evelyn in the hospital on August 26 with Ray and her mother, Mrs. Clinton Luck. (Evelyn’s father, a Portland Salvation Army employee, didn’t accompany his wife and one of his daughters to Illinois.) Articles mentioned  a three-year-old named Sheila, who was either Ray and Evelyn’s adopted daughter or the child whom the couple was in the process of adopting*. According to the Dixon Telegraph, Shelia was in the audience and saw her mother’s deathly descent.

Evelyn’s first husband Gerald Fox died in 1945. She had no other children.

After six days, Evelyn died in the Dixon KSB hospital from pneumonia and pulmonary edema. A coroner’s inquest concluded that her death was accidental and that the ropes that pulled apart during the act hadn’t been tampered with.

The Dixon community rallied around Evelyn’s family, raising money to pay for her hospital expenses. In fact, the coroner’s jury donated their fees to the fund. Within a few days, the people of Dixon had collected enough to pay the entire medical bill and then send Ray $252.09 to assist with the performer’s funeral costs.

One of the articles stated that the payment for each performance at this festival was $100, which seems like such a small amount in comparison to the price Evelyn ultimately paid. The silver lining might be that Evelyn loved her career (something not true for many people) and that she died doing something that she was passionate about.

*The following obituary was transcribed on Ancestry, but there was no source information. (This is the only account I read of Sheila perhaps being adopted.)
“Daisy Luck Marrion, 37, former Minot woman, died recently in a Dixon, IL hospital of injuries received in a trapeze accident, as she was performing with a carnival. She and her husband, Ray Marrion, an aerialist, had performed together as the “The Sky Devils”. At the Dixon carnival, where she was appearing with 3 others, the trapeze ropes that held her broke and she fell 105 ft to the ground. Her husband was not with her when she was filling this engagement, but was at their home at Monterey Park, CA. Mrs. Marrion lived 6 days after the accident. Her husband, her mother, Mrs. Clinton Luck of Portland OR and sister Mrs. Betty Carroll of San Bruno, CA were with her at the hospital until her death. The body was taken to Los Angeles where services were held. Mrs. Marrion, who had taken up acrobatics and trapeze work 8 years ago, was born in Minot and attended Minot schools. She was married to Gerald Fox in 1936. He died in Mar 1, 1945 and on Apr 1 1946 she married Ray Marrion. She had no children of her own but at the time of her death, was caring for a 3 yr old, pending adoption. Besides her husband, her mother and sister Betty, survivors include 3 others sisters …Mrs. Emma St George, Mrs. Nina Hilde both of Portland OR and Mrs. Margaret Bigley of Baldwin Park CA. 2 aunts…Mrs. Cora Schmidt and Mrs. Gunder Stenberg and a nephew Donald Keyes in Minot.”