Months ago I posted some of my favorite mysteries from Green Hill Cemetery’s Mortuary Reports: mainly entries about unusual causes of death or people who died violently.  I researched several of these people and found clippings in the newspapers about them or other biographical information, but because I hadn’t located a grave I’ve hoarded those stories until now.

Unfortunately I still don’t know where most of the people from the original post are buried. It’s possible that I’ve overlooked a tombstone or that the grave is unmarked. For those buried promiscuously (not in a family square), tracking down a grave is like finding a needle in a haystack-I just have to hope that one day I stumble upon a slab of granite one day bearing one of these familiar names.

Frank L. Bernard died February 26, 1889 at the age of 25. His COD was reported as, “killed a train on Richmond and Danville R.Road.” The only blurb in the newspapers didn’t provide any other details about Frank or his death under the wheels of a train. There are some discrepancies among death dates. According to the Virginia Deaths and Burials Index he died on Feb. 1, 1888 but I’m leaning towards late Feb. 1889 as the actual time of his grisly demise. I do know that Frank was the son of Benjamin A. and Judith Bernard of Danville. When the 1880 census was taken he was 18, living with his parents, and employed in a tobacco factory. His brothers Benjamin (33) and Joseph (27) were reported as “tobacconists.” A younger brother, George, also lived in the home.

April 28, 1890: Mrs. E.M. Raines, age 38. COD: “unknown Drop Dead.” There is a note that Emma is buried in “Charlie Bennett’s section,” but I haven’t been able to locate that area or find evidence of  her relationship to the Bennett family. Unfortunately there were no birth, census, or marriage records that shed any light on other aspects of Emma’s life. For now I have to be content with only the newspaper’s vague account about her death: that on a Wednesday night she told her husband that she would die if she couldn’t catch her breath. Before he was able to help her, she “dropped dead.”

Based on the newspaper report from the Richmond Dispatch on Jan. 26 1892, Eugene was shot by Lank Jordan while the two were shooting at a mark. Conflicting information at the scene warranted a coroner’s inquest. Some believed that Eugene was playing craps with a group at a slaughter-pen just outside of the city. A witness who heard the gunshot claimed that he saw a group of young men put Eugene’s body inside of a house and flee. Jordan told authorities at first that Eugene committed suicide, then he said that the victim accidentally shot himself, and he finally admitted that he was the one who’d pulled the trigger. Eugene’s death was ruled accidental and Lank Jordan was freed. It’s difficult to say how the shooting affected him emotionally and socially. He was young, probably around the same age as the deceased, and he had to live in the late 19th century as an African-American tied to the death of a Caucasian teenager. The weight of having been involved in an accidental death could’ve been mentally crippling on its own. That scarring was likely compounded by persecution in the court of public opinion. 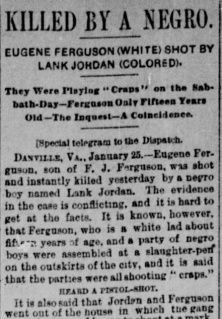 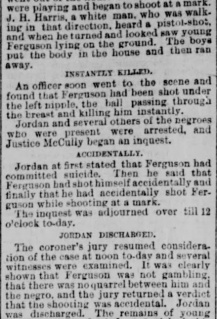 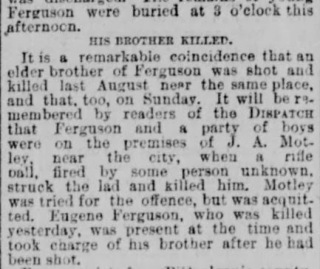 After reading this, I went back to August 1891 in the mortuary reports and found an entry for Eugene’s brother, the one mentioned in the original Mortuary Mysteries post and the above article. “Geo. Ferguson, age 18 years, I hereby certify that I saw him on the 9th day of August 1891 and that he died on the 9th day of Aug. 1891 and the cause of his death was gun shot wounds. T.A. Fox Undertaker, R.V. Barksdale, M.D.“ 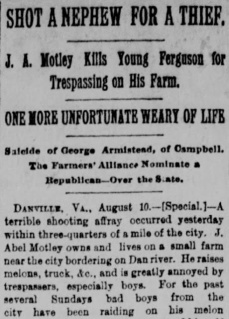 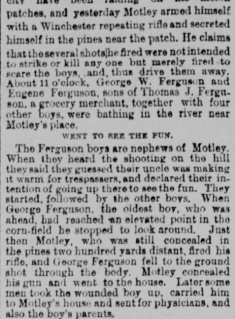