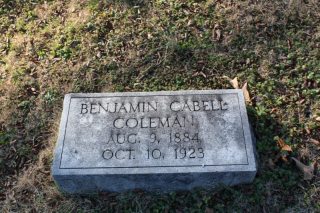 The man buried underneath this flat lawn marker in Green Hill was only 40 years old when he died in a bloody murder-suicide that played out in a Main Street boarding house almost 90 years ago. His is one of the many tragic stories that lies six feet under the soil on the cemetery’s quiet grounds.

Before we get to that part, let’s start with the little background that we know about this man. Benjamin Cabell Coleman was born in Aug. 1884, one of several children belonging to John Alexander Coleman and Ann Cabell Coleman, who are buried nearby. The Colemans and Cabells were well-known in Virginia and he was also reportedly related to Mayor Harry Wooding. 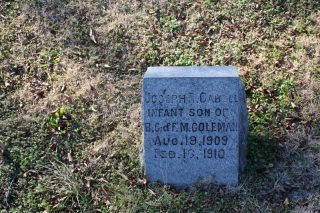 Benjamin’s mother died when he was 9 of typhoid fever and his father died when he was about 15 years old. This could explain why in the 1900 census he was listed as a “boarder” at the Collie home in Pittsylvania County although none of his siblings are in that household. In 1908 Ben married Fannie Lou (or Lew) Moseley.  They had one child, Joseph Cabell Coleman, born in 1909 and who died in 1910. There was no record of any other children.

Ben would hold several different occupations over the years. He was a “combination man” in 1908 for “So. Bell Tel. & Tel. Co.” In the 1917 directory he was a justice of the peace, living at 935 Green Street. In 1920 he was an electrician, in business for himself. He and Fannie rented a room at 724 Main Street, which from descriptions, sounded like a multi-family dwelling owned by the Stranges with some shared spaces between the tennants.

By 1923 he’d secured a position as a State License Inspector and he and his wife still lived at the Strange home. I couldn’t find a photo of Coleman, but according to his draft card he was tall, medium-built, with dark hair and blue eyes. Coleman had a good reputation within the city both personally and professionally, which is why his death came as such a shock to the community.

While Ben’s death made the headlines in October 1923, he was in the local news earlier that year as well for non-work-related issues. In February he was shot through his ring finger, even though his friends were initially led to believe he’d injured it while working on a car. Whether the accidental shooting was at his own hand or someone else’s was never reported. The next month that finger was amputated after he developed blood poisoning. It seemed a little odd that after reporting the sketchy details of the shooting, there wasn’t further investigation into whether Coleman had shot himself or if someone else had done it.

This headline spanned the entire width of The Bee‘s front page. After researching the murder-suicide I was left with more questions than answers. The key to trying to understand Ben’s motivations would be in a letter found on his body. The contents of this letter were never fully divulged, thanks to the authorities.

The man that Ben murdered, William Overton Williams, and his wife Nannie Thomas Williams (who was also shot), boarded next door at 716 Main Street but ate their meals at the Strange home. This seems to be the connection between the Colemans and the Williams. Nannie had been back and forth between Danville and Richmond for two years assisting with the car of her mother, so it’s likely that William spent some of his time during her absence with the residents at the Stranges’.

On the evening of October 10, six or so people were having dinner at the boarding house, probably like any other night, only their meal would be disrupted by the sound of gunshots coming from the front foyer. One witness, Mr. McMakin, turned to see William falling to the floor and Ben holding a large revolver. He also claimed Ben was shooting in Nannie’s direction. After the shots ended, Ben walked out onto the porch for a moment before re-entering the home and starting towards his room. Those in the home probably rushed to the aide of the victims without paying much attention to Coleman. (Or maybe they ran the other way, I don’t know.) Shortly after Coleman locked himself in his room from the inside, another gunshot was heard by neighbors. In the foyer there was one pool of blood by the piano bench where William had been shot and another pool across the room. It was said that the room was “blood spattered” and bullet holes pierced walls and furniture.

When police forced the door open, Coleman’s body was found “…lying in a crouched position behind the bed, heaped on a lot of papers and documents. He had sent a bullet from his .38 calibre Smith & Wesson, the same weapon with which he had fired five times into the bodies of Mr. and Mrs. Williams, through his head from the right temple side. A large pool of blood surrounded his body.” The description of the way papers were scattered suggested that he had been extremely agitated during his final moments and before sitting on the bed to shoot himself, he’d torn the room apart. (His body had fallen to the crouched position described earlier.)

The shootings left the community in a state of disbelief and of course, curiosity. Nannie, who’d only been shot once while trying to protect her husband, was taken to the hospital.  Henry McMakin, who’d gone to Coleman’s room with a few other people, claimed that a note found in Coleman’s pocket by a police officer was the key to Ben’s murderous rampage. “…O.W. Bates read a few lines of it aloud in the presence of horrified persons who had gone into the room. The word ‘betrayed’ was contained in the missive together with the name of Mrs. Ben Coleman. It was generally understood that the paper was a confession made by Williams and bearing his signature.”

The coroner, who kept Bates from reading the whole letter out loud, later refused to divulge the letter’s contents in detail. Police Secretary J.C. Elliott also declined to discuss the letter except to say that “it explained everything.” Witnesses who saw the letter while it was in Bates’ hands said that the paper on which it was written contained writing about half the way down, followed by a blank area, then more writing at the bottom which looked like a different handwriting from above. The whole letter was supposedly written by Coleman, with the gibberish at the bottom most likely written after the first shootings when he was in a panicked state. Mr. Williams’ associates insisted that whatever the letter was, Coleman had forced him to sign it the Monday before the slaughter.

In an effort to try to understand Coleman’s frame of mind on the 10th, people recalled his behavior that day and the final conversations they’d had with him. Some people saw Coleman carrying out his work duties until an hour before the shootings, seeming normal and cordial. One person said that a couple of hours before the murder when he saw Coleman, his eyes looked glassy as he inquired about other boarding houses. McMakin, who seemed eager to talk to journalists, claimed that Coleman had confided in him just before dinner that he was going to kill Williams, but McMakin thought he’d talked him out of it (he might have thought he was just blowing off steam or maybe that conversation never happened). Apparently just before he killed Williams, Coleman walked outside to the porch where two men were seated, said, “I forgot,” and then went back into the house.

While no one ever came out and explicitly said that Coleman had murdered Williams  because he found out Fannie was having an affair with him, it was heavily implied. The word “betrayal” allegedly mentioned in the letter could’ve referred to any number of things (real or imagined), and what happened to trigger Coleman’s violent actions on October 10 might never be fully explained.

William Williams was buried in Richmond.

Ben’s wife, Fannie, later remarried Charles Dearheart. When she died in 1979 she was buried with Dearheart and members of the Moseley family in Green Hill. The area where she was buried is across the cemetery from the graves of Ben and her first child.