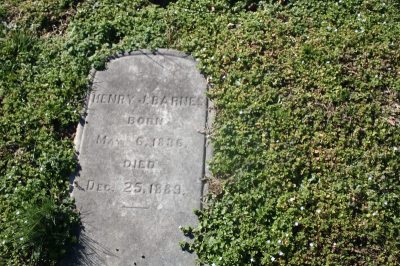 This is the tombstone marking the grave of Henry Jefferson Barnes, who was born May 6, 1836 in the Birch Creek District of Halifax, Virginia. He was the eldest child of  Fielder, a blacksmith, and Harriet Gholson Barnes.

In April 1861 Henry enlisted in the service to Company A, the Virginia 18th Infantry Regiment at which time his physical description was “5’6”, dark complexion, blue eyes, brown hair”(Historical Data Systems). He was mustered out of the military in Danville, Virginia in December 1862. Where and with whom Henry lived over the years is unclear. In 1870 he was living with his parents in Halifax, earning a living as a farmer with no spouse. By 1880 he was living in Danville, employed as a grocery clerk and married to Virginia “Jennie” Branch, a dress maker. There were also two female boarders in the Main Street home. An article published after his death in 1889 suggests that he’d lived in Danville for 25 years, which could have been printed in error. It appears as though Henry and Jennie married after 1870 when  Henry was over 30 and Jennie in her late twenties.

There is no offical record of the couple having any children, but there is at least one tombstone that confirms that they had at least one daughter that died either in infancy or was stillborn.

Another nearby grave marker is too weathered for me to read clearly, but it could possibly be the tombstone for another infant child belonging to the couple.

Henry died on Christmas Day of 1889, which means his cause of death was recorded in Green Hill’s mortuary reports. “Chronic diarrhea” was the recorded COD, but that may have been based only on his symptoms and not an official diagnosis.

Earlier in 1889 he apparently tried to commit suicide by using laudanum while suffering from “temporary aberration of mind.”

Less is known about Virginia, Henry’s wife. She died on Feb. 3, 1896 and is buried near Henry, her tombstone also no longer upright.