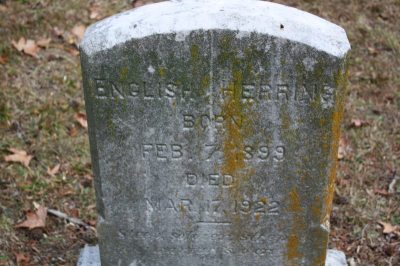 English Herring’s tablet tombstone sits in a sparsely population section of Danville’s Green Hill Cemetery. In addition to his birth and death dates, there is an inscription which partially reads, “Sleep, soldier, sleep…” The second line could read, “Thy warfare’s o’er,” but I’m not 100% sure.

English was born on Feb. 7, 1899 (perhaps 1897 according to Ancestry records) in North Carolina. His mother’s name was Delia, but information about his biological father was unavailable.

At the time of the 1910 Federal census, Delia was married to Robert Blackman and the family was living in Pearces Mill, NC. English and three of  his full siblings are listed as Robert’s step-children and Robert and Delia had three children of their own. Also in the home was Robert’s sister, Lillian Blackman. Even though he was somewhere between 11-13 years old, English was working at a cotton mill as a doffer. The primary responsibility of a doffer was to replace the bobbins when they were full. Child labor in cotton mills in the South was common for both males and females. English’s time spent in the cotton mill could have led to serious health problems like brown lung, tuberculosis, bronchitis, and these children were also at risk for work-related accidents or death. English, his three full siblings, Robert, and Lillian all worked for the cotton mill in various capacities.

By the time of the 1920 census English was a patient at the U.S. Army General Hospital-No 19 in Swannanoa, Buncombe County, North Carolina. He was a private in the U.S. Army at that time, aged 20. This hospital was designated primarily for the care of tuberculosis patients and in 1920 it was one of the two main TB treatment facilities for the Army. UNCA’s library houses a number of photographs depicting everyday life for Oteen’s patients, which give you a glimpse into things and people English might have come into contact with while hospitalized.

A little over two years after that census was taken, English Herring passed away, never having married or had children. According to the March 18, 1922 issue of Danville, Virginia’s “The Bee,” his death was attributed to tuberculosis.

“Schoolfield Resident Dies After Long Illness
English Herring, aged 23, died during the night at his home, 81 Madison Avenue, Schoolfield, after a prolonged illness of tuberculosis. His condition recently had become quite serious. He was a native of Robinson County, NC and had lived in Schoolfield for several years. The funeral will take place from the home tomorrow afternoon at 4:30 p.m. and interment will be made in Green Hill Cemetery.”
The Schoolfield Mill Village was created by Riverside Cotton Mills (later Dan River Cotton Mills) as a means to provide housing for non-local people recruited to work in the factory, taking its name from the three brothers who originally founded the mill. It wasn’t officially part of the City of Danville until 1951. Because English was living in Schoolfield, it’s likely that he had found employment in the cotton mill once again.