Earlier I posted some pictures from my recent trip to the cemetery at All Saints Episcopal Church in Pawleys Island, South Carolina. While tiptoeing through the Flagg family plot after locating the alleged grave of Alice Flagg, I noticed an interesting inscription on one of the obelisks:

The Flagg family was one of many who lost members during that particular hurricane, as apparently hundreds of people on the nearby coast perished in the waters on that date. The Flaggs, a prominent family in the area, had vacation homes on Magnolia Beach.

In addition to those listed on this marker, Arthur’s father (also named Arthur Flagg) and mother (Georgeanna/Georgiana) Flagg) also died in the violent storm. 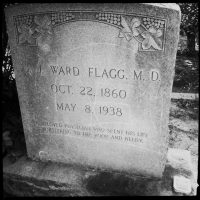 This entry was originally posted in 2012.